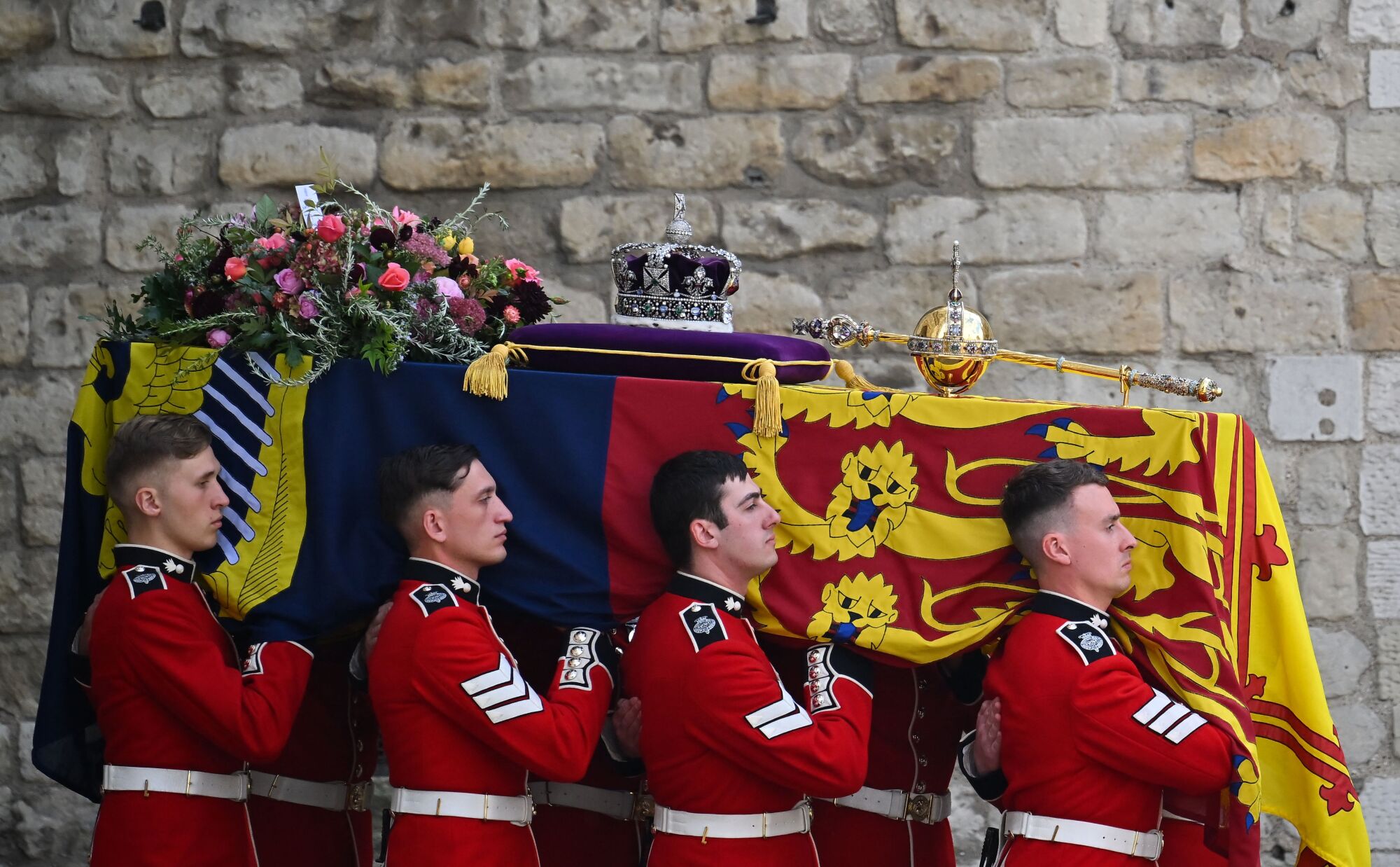 Britain bid its last farewell to Queen Elizabeth II on Monday, honoring its longest-reigning monarch with a state funeral that provided pomp in solemn circumstances, drew dignitaries from around the world and wowed a global television audience.

The hour-long event inside Westminster Abbey, attended by 2,000 people, followed 11 days of national mourning and highly choreographed public ceremonies. Afterwards, the queen’s coffin, surmounted by symbols of state, made its slow procession through the streets of London on its way to Windsor for smaller ceremonies and a burial later on Monday.

Tens of thousands of people flocked to the outskirts of Buckingham Palace, hoping to catch a glimpse of the procession on its route and pay their final respects to a figure whose life many say served as the very model of a great modern monarch.

“She’s been a part of our lives forever,” said Angie Judge, who along with her sister, Maureen, woke up before dawn to make sure they found places in Hyde Park to watch the funeral on a giant screen. Both women wore white T-shirts with the words “Forever in our hearts” printed over a portrait of the queen.

“It will never be the same again. I love Charles, but I still can’t say ‘God save the king,’” Judge said, referring to the new king Charles III.

Before her death on September 8, Elizabeth reigned for a record 70 years that saw Britain emerge from the ashes of World War II and eventually enter the digital age. Before the funeral began on Monday morning, Westminster Abbey’s largest bell rang once a minute for 96 minutes to mark each year of the late monarch’s life.

Her coffin, which had lain in state in the Houses of Parliament for more than four days for hundreds of thousands of mourners to file by, was carried on a gun carriage by an honor guard to the abbey, the former church where Elizabeth was laid to rest. married in 1947 and crowned in 1953. Among those walking behind the carriage were Charles, his sister and two brothers, and their two sons, Harry and William, who is now first in line to the throne.

Eight Grenadier Guards pallbearers from the 1st Battalion, Queen’s Company carried the coffin inside for the service, which began at exactly 11 a.m. when David Hoyle, the dean of the abbey, exhorted parishioners to pray in “a church where remembrance and hope are sacred duties. ”

Attendees included the Royal Family, President Biden and First Lady Jill Biden, the King and Queen of Spain and Belgium, Emirs from the Middle East, other heads of government and selected members of the British public, most of whom did not know another sovereign other than Elizabeth.

Outside, some people had lined up overnight so they could get into designated viewing areas, which by 10 a.m. Park. Street vendors did a brisk business selling everything related to Britannia, including British flag hats, shawls, flags and other trinkets.

As the congregation inside Westminster Abbey stood for the first hymn, the entire crowd in Hyde Park also rose from their blankets and lawn chairs and remained standing until the singing ended. One of the two readings from Scripture was delivered by Liz Truss, the British prime minister, whom the queen formally appointed to the post just two days before her death, reflecting the sense of duty that ended with her subjects everywhere. the United Kingdom.

“It just summed up what the country was and what it means to be British,” said Dan Schofield, who came from outside London with his wife and two daughters. “We just wanted to pay our respects and that our children, when they are older, can say that they were here.”

But not all Britons shared equally at this time. Many went about their daily business or found other ways to enjoy the unexpected holiday.

Tina Thorpe, a Londoner, said the wall-to-wall coverage in the British media over the last week was too much.

“I think he’s getting over the line,” said Thorpe, 62. “It’s interesting, but I don’t like endless royal comments. They are telling us how to cry.”

Thorpe said she enjoyed celebrating the queen’s Platinum Jubilee in the summer and threw a block party, but that it was more about bringing the community together. The queen’s death has elbowed the news out of anything else.

Such concerns were brushed aside inside the abbey, where Justin Welby, the Archbishop of Canterbury, delivered a homily that ended with the words “We will meet again,” an echo of a message delivered by the queen during the COVID-19 pandemic. to comfort those who had lost loved ones. His use of the phrase was drawn from Vera Lynn’s song “We’ll Meet Again”, an iconic piece in World War II Britain.

Shortly afterward, a military bugle sounded the Last Post, similar to Taps in the US, signaling the conclusion of the service and the beginning of a two-minute silence in memory of the queen. It was a silence that weighed heavily outside the walls of the abbey: takeoffs and landings at London’s Heathrow airport, one of the busiest in the world, were suspended for half an hour so as not to break the silence. In Hyde Park, many stood tall, heads bowed in a moment of uniform solemnity remarkable for a crowd of that size.

Funeral attendees then sang the national anthem, some of them saying the words “God save the king” for the first time. A final wail from the queen’s piper brought the service to an end.

Then, as the sun broke through the thick layer of cloud that had blanketed London in the morning, Royal Navy sailors carried the coffin once more to Wellington Arch, to the sound of a funeral march backed by the tolling of Big Ben and the loud blast from the artillery cannons. . The coffin was loaded into a hearse, which headed to Windsor Castle, where the royal family will lay the queen to rest in a private ceremony in St George’s Chapel.

After the funeral, tables outside the City of Quebec pub, just across from Hyde Park, quickly filled.

“To the queen,” said a group of three friends as they drank glasses of Guinness and watched the BBC’s non-stop coverage of the procession on a mobile phone.

Reflecting on “the end of an era,” Zoe Dearsley marveled at the queen’s seven decades of service.

“She served all that time with such grace. Being 96 years old, two days before her death and still doing her duty, meeting with Boris Johnson and Liz Truss, probably the last thing she wanted to do, is just extraordinary.”

Her boyfriend, Dan Ellis, said that as a native South African, he has always been a little less enamored with the British monarchy, but still acknowledges the dedication and staying power of the queen.

“I’m kind of skeptical about the monarchy in general, but she had that character,” he said. “She was the best in leadership.”

Bulos, Stokols, and Chu are staff writers. Boyle is a special correspondent.

By the Editorial Board September 25, 2022 6:36 p.m. ETlisten article(2 minutes)The Biden Administration's trade policy has largely been a failure, hardly better than...
Read more

‘House of the Dragon’ Episode 6 Recap: What Happened?

After half a season house of the dragon he finally made his long-awaited time jump in Episode 6 to approximately 129 AC, ten years...
Read more

So I was pleasantly surprised when I felt a second orgasm hit me a few minutes after the first. After that, my clit...
Read more

The Treasury joins the ouster of a regional bank chief who clashed with Beijing.
Read more
Load more

MIAMI — In her little more than 20 months as a federal judge, Aileen M. Cannon worked mostly in the dark, being nominated and...
Read more

JWST has seen clouds of sand on a distant alien world

Jazz but make it YouTubey

‘House of the Dragon’ Episode 6 Recap: What Happened?

After half a season house of the dragon he finally made his long-awaited time jump in Episode 6 to approximately 129 AC, ten years...
Read more

So I was pleasantly surprised when I felt a second orgasm hit me a few minutes after the first. After that, my clit...
Read more